Film on the famous Mersey Ferries

Mersey Ferries and Liverpool’s picturesque waterfront have starred in lots of incredible films, television programmes and commercials on national and international platforms such as BBC, Channel 4, Sky Atlantic, FOX and Sky Sports.

Liverpool is one of the most filmed cities in the UK, and our two Mersey Ferries can be hired to provide unique locations and backdrops for filming and photography shoots.

We operate two vessels; the Dazzle Ferry, the only operating dazzle ship in the UK, and the Royal Iris of the Mersey with its traditional white, black and red livery.

The indoor and outdoor spaces on both vessels can be used to accommodate a wide variety of filming and photography shoots. Filming can also take place in our three ferry terminals at Pier Head, Seacombe and Woodside. The Liverpool Gerry Marsden terminal at Pier Head is a modern ferry terminal based opposite on the Three Graces on the Liverpool waterfront. There is also an outside area on the top floor of the building, which provides panoramic views of the River Mersey.

If you wish to film from one of scheduled ferry services or charter a vessel for filming, please contact filming@merseyferries.co.uk

Please note that all filming must be approved in advance, VAT and fees will apply. 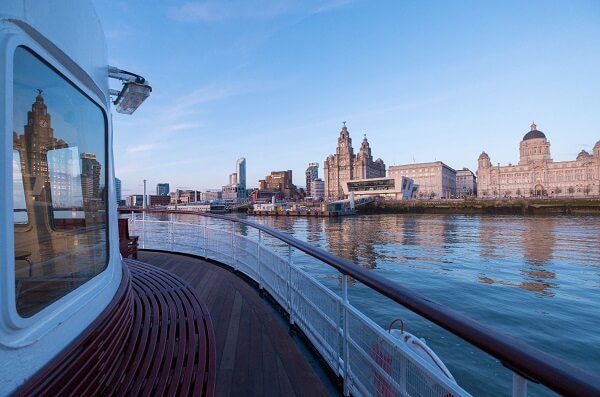 View from the Royal Iris of the Mersey